Building a chatbot is only the first step in making it useful. Use NativeChat’s built-in analytics dashboard to monitor your bot performance, look for areas to optimize, and fix broken conversation flows.

To check your bot’s performance, go to the Analytics tab. Once there you can adjust the period for which you want to see data and the aggregation type - weekly or daily. The default time period is 6 weeks back and the default aggregation type is weekly. The data is not showing the current (unfinished) week, but only the complete weeks within your selected period.

Learn how many people are using your bot and how successful they are.

All vs. successful conversations 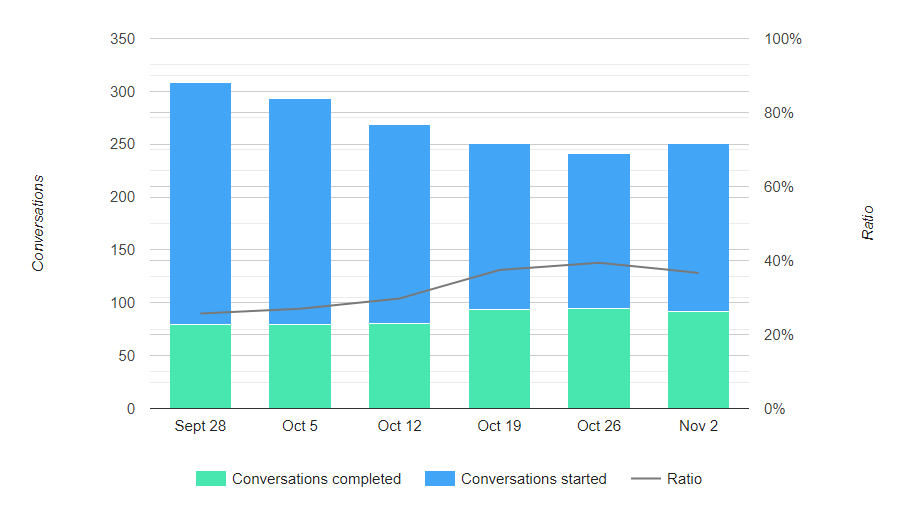 The bars show the weekly/daily number of conversations started vs. completed. This gives you an idea of how many people use your bot and how many of them are being able to complete their tasks. If the numbers are lower than expected, you should think of a better way to lead people to interact with your bot.

The black line is the trend of the ratio between the two numbers. Ideally, it should be as high as possible because we would like everybody who starts a conversation with the bot to finish it successfully. When you make changes to the bot, make sure you come back and check this trend to see if they have a positive (or negative) impact. 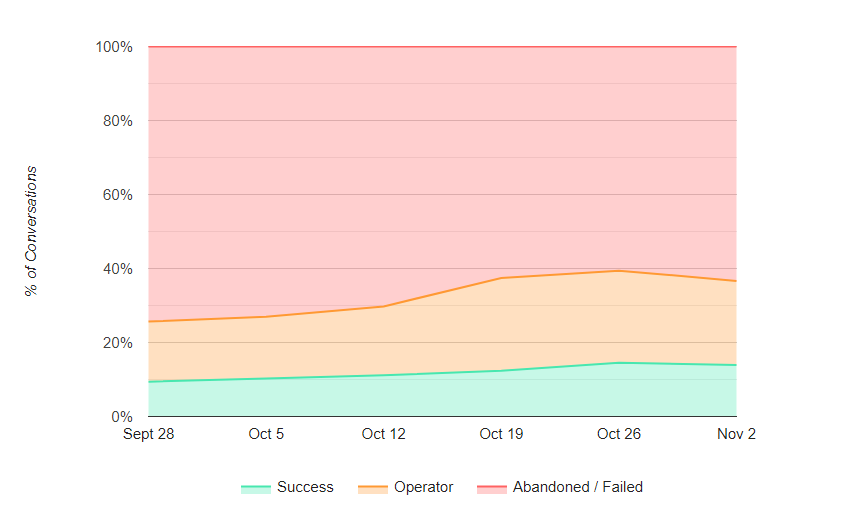 This chart shows the relative proportion of the successful conversations to the abandoned ones and the ones handed off to a human operator.

The orange operator area on the chart is shown when you have a conversation with a stay-silent command in it. Usually, it is used when you hand off the conversation to a live person to respond to user messages. This chart will show in how many cases the bot was not able to handle the task on its own and the user had to request to contact a human instead.

This chart is basically the same as the Success Ratio one but with absolute numbers instead of percentage proportions.

Shows how many of the users continue to use the bot week after week (or day after day).

If your bot handles tasks that are repetitive vs one-time (like ordering a lunch vs. filing papers for retirement), you can use this chart to see how many of your users return to talking with it in time.

In the example above 261 users had talked with the bot during the week that starts on Sept 28. In the following week (the week of Oct 5 in the 1st column) only 2% of these people had talked to the bot again. In the third week - 1% and so on. 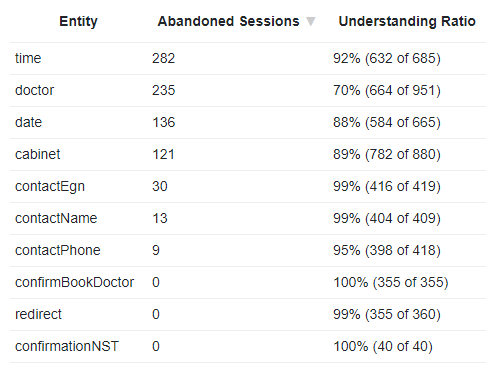 The table shows the names of all entities you have defined in the cognitive flow as rows. For each entity there is information about:

Use this information to improve the training data of your bot so that it can recognize user input in more cases. Or make adjustments in your conversation flow if the questions the bot asks are not expected by the users. It could be that they don’t want to provide the answer the bot asks for because the question doesn’t make sense to them.

The chart shows the relative sizes of interaction paths (the steps through which a conversation between the bot and the user goes).

In the example above, many conversations start with the date question and then the path continues with the time, then doctor and so on steps.

Ideally, you would want users to go through each step only once and successfully reach the end of the conversation. The lengthier a path on the chart is, the more steps and repetitions were there in the conversation.

There are two more interaction path charts - with only the successful and only failed (abandoned) conversations. They can give you an idea of how the paths for these two types of conversations differ so that you can fix the failing ones.

Somethings missing or not clear?

Ask a question in our community forums or submit a support ticket.